Westboro Baptist Church has upset a few people for claiming that Nelson Mandela, who died on Thursday at 95, was in hell…as they seem to do with everyone. 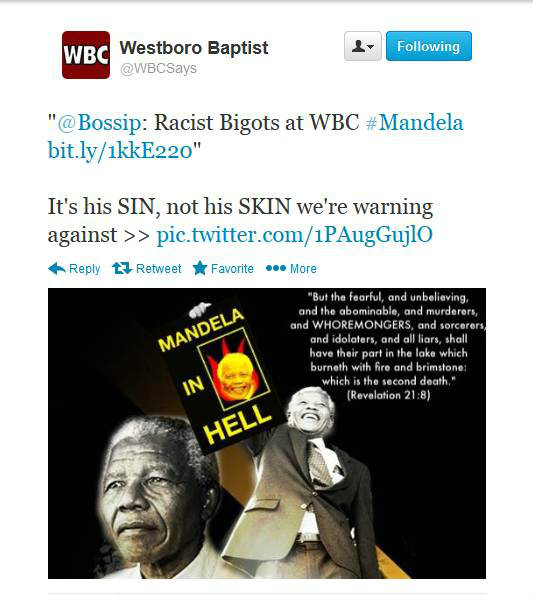 Westboro Baptist Church is pretending it plans to fly to South Africa to protest Nelson Mandela’s funeral, suggesting the anti-apartheid leader is in hell. (Photo: Twitter/WBCSays )

A blog called Bossip blares in a headline: “Racist Bigots At Westboro Baptist Church Plan To Fly To Africa To Protest Nelson Mandela’s Funeral!” … and points to an article from iAfrica.com:

The controversial organisation, which has picketed funerals of US soldiers and other prominent people, tweeted that it will be travelling to South Africa to protest at the struggle icon’s funeral.

“‘World leaders mourn the death of Nelson Mandela’ #Madiba ‘Woe unto you, when all men shall speak well of you!’ Jesus Christ at Luke 6:26,” it later posted.

However, other Twitter users have hit back at the organisation.