Colin Kaepernick, 25, has been getting a bit of criticism of late because he is apparently the first NFL quarterback to be so prominently tattooed on both arms. The former University of Nevada player, however, may be addicted to literally wearing his faith on his sleeves.

I realize tattoos are ways to pay homage to your religion, children and motorcycle gang. I’m cool with LeBron James looking like an Etch A Sketch.

… But I can’t shake the notion that a person’s body is a temple, and you don’t cover temples in graffiti. …

Did Sammy Baugh, Johnny Unitas, Doug Williams or Joe Montana have arms covered in ink? Do Tom Brady, Drew Brees or Aaron Rodgers? The world will end when Tim Tebow shows up a tattoo parlor. …

Then there are Michael Vick and Terrelle Pryor. Neither exactly fit the CEO image, unless your CEO has done a stretch in Leavenworth or has gotten Ohio State on probation over free tattoos.

That’s what makes Kaepernick a threat to the stereotype. By all accounts, he’s polite, hard working, humble and has never been to prison. He sounds more like a Tebow who can throw. …

His ink-covered arms will one day raise the Vince Lombardi Trophy. Imagine the impact that could have.

Kaepernick’s parents were reportedly upset by Whitley’s comments, telling a reporter they were irritated and bothered, but not angry — knowing that Whitley had never met Colin and was most likely speaking out of ignorance. 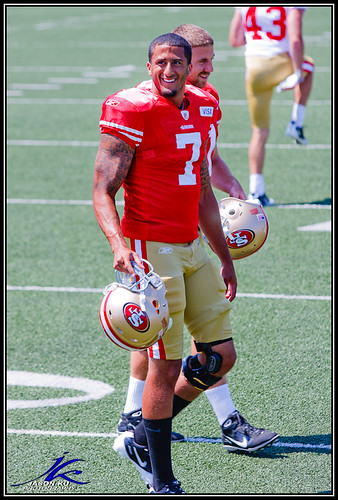 “It annoyed me. You are categorizing this kid on something like tattoos? Really? Saying other guys are role models because they don’t have them? Really? Some of these other guys don’t have crystal clear reputations. That’s how you’re going to define this kid? It’s pretty irritating, but it is what it is,” said Teresa Kaepernick, the QB’s adoptive mother, according to USA Today.

Kaepernick, who has spoken about putting his faith in God, graduated high school with a 4.0 GPA and has ever been arrested. He reportedly decided in college that he wanted Bible verses tattooed on his body — and started with psalms on his biceps.

The Huffington Post writes that “the psalms tattooed on Kaepernick’s arms address his competitive instinct, according to Sports Illustrated. Psalm 27:3, on one arm, reads: ‘Though an army besiege me, my heart will not fear though war break out against me, even then I will be confident.’ Psalm 18:39, on the other arm, says:, ‘You armed me with strength for battle; you humbled my adversaries before me.’”

“Colin’s a fairly religious kid, but he’s not in your face about it. It’s more about him and what he believes,” explained Rick Kaepernick, the 49ers quaterback’s adoptive father.

Kaepernick has visited Summit Christian Church in Nevada to speak about his budding NFL career and his faith, which he apparently feels are intertwined:

“I don’t think most people look at football players as what they’re doing out here is trying to glorify the Lord. I think a lot of people think of it as oh it’s a game, let’s go win. Ultimately, that’s your goal, that’s what you want to do, but you also want to glorify the Lord on your way to doing that.

“My faith is the basis from where my game comes from. I’ve been very blessed to have the talent to play the game that I do and be successful at it. I think God guides me through every day and helps me take the right steps and has helped me to get to where I’m at. When I step on the field, I always say a prayer, say I am thankful to be able to wake up that morning and go out there and try to glorify the Lord with what I do on the field. I think if you go out and try to do that, no matter what you do on the field, you can be happy about what you did.” (Source)

San Francisco 49ers quarterback Colin Kaepernick shared this photo on Twitter on May 19, 2012, writing: “The pick of the new ink….. I can finally release this to the public cuz I showed my parents.” (Photo: Twitter/Kaepernick7)

Some might argue that people are free to do what they will with their bodies as long as no one else is affected, but does being a Christian impact Kaepernick’s decision to get tattoos? (see Should Christians Get Tattoos? Are Tattoos Sinful?) And is it possible that the 25-year-old 49ers QB has a “Christian tattoo addiction“?